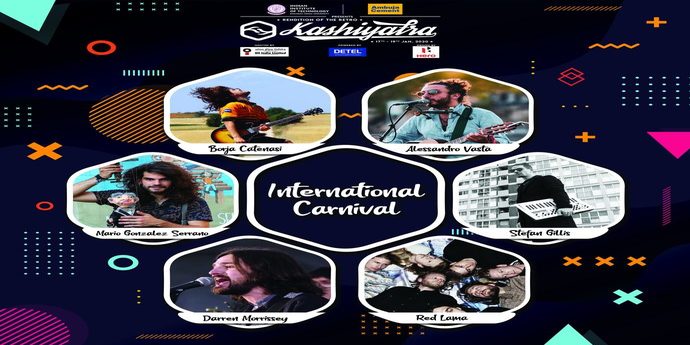 This year, party at the most exuberant and colorful international carnival hosted by Kashiyatra (IIT BHU), and soak in the myriad sights and sounds of the festivities. This carnival is a perfect blend of different traditions and cultures, and contemporary world festivals. So let your hair down, and go crazy with this vibrant and high-spirited carnival. With immense pleasure and reverence, Kashiyatra for the first time is organizing an International carnival with artists from different countries.

A renowned singer and songwriter from Brussels, Belgium. His music is a mix of 80’s synth sounds and vintage hip-hop drum machines with strong themes of love, passion, and identity. Stefan is known also as a participant of TV shows “Belgium’s Got Talent” and “The Voice France” that brought his on the new level of performing and popularity in his country.

A Powerful Seven-Piece Rock Band from Denmark. In the front, vocalist Johannes Linnet is a seductive figure, who, with an almost Jim Morrison ease, ties it all together with his powerful voice. While the Red Lama shines on record, they are on stage even sharper when, in a true inferno of feverish playfulness, they go to the extremes and test the boundaries of both themselves and the audience.

A guitarist from London, UK. He is set to engage you with his breathtaking performance and get you dancing to his numbers.

A street performer from Spain who knows how to gather an audience with his spellbinding guitar prowess. He has traveled to almost all the countries of central Europe showing his skills. With many different collaborations, in many cases of spontaneous and casual spectators, he was able to expand his musical discourse, which fluctuates with eclecticism between blues and rock, reggae and funk.

A one-man band from Italy. His music will get you grooving and having the time of your life. He is set to make his performance a memorable one!

World-famous puppeteer from Spain who brings magic to the stage with his astounding skills. He is set to make you feel awestruck with his puppet theatre.