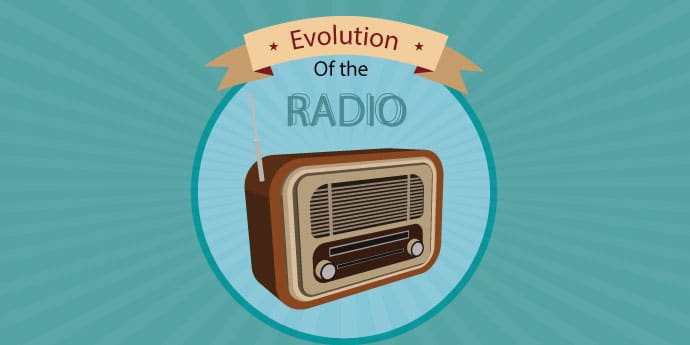 Radio is the technology of communication through the use of radio waves. We can have two types of communication radio, mass, and one-to-one. Still today, both these functions are practiced. From television to cell phones, radio wave technology is everywhere to conduct person-to-person contact primarily. But mostly, when we hear the term radio, the first thing that comes to our mind is a radio station broadcasting to the general mass of people.
From the time it was invented till date, the radio has been an efficient means of communication. Although it is not famous with this current generation, radio still has some hold in information technology.
The first news provided to the public was through the medium of radio. The history of the Evolution of Radio goes a long back. It was a delightful privilege and had good potential when the radio was invented.

The name or the term –Radio

Initially, the term ‘Radio’ was used by scientists to describe electromagnetic radiation. Simply radiation or radiant is meant by the word. From the year 1886 to 1888, the studies of Hertz indicated that, through the ether, the electromagnetic wave could travel at an incredible speed of light. In 1890, a transmitter, receiver, and conductor were developed by scientists like Nicolas Telsa and Guglielmo Marconi. Without any wires, poles, or cables, these inventions made the transmission of code messages to distant places. Radio-telegraphy was born in this way, and a wireless telegram was termed Radio-grams.

History and Evolution of The Radio – Who invented it?

Believed it in 1894, a young Italian scientist named Guglielmo Marconi, with a desire for long-distance wireless communication, woke up one morning. As an electromagnetic wave, his ambition came out. Radio waves can do much more to the world than just electromagnetic waves, felt Marconi.
Therefore, he searched for every information available there. Combining this information with the other scientist’s ideas, he developed the first device of portable transmitter and receiver. A helpful device out of what was formerly registered as a mere experiment, Marconi has built a useful device out of it. Between the distant location, these devices could function. For this invention, Marconi should be credited. He made the device based on the many experiments the scientist previously.
From the time it was discovered to becoming what it is today, radio has been going through various exciting phases. Next, we are going to discuss those phases of Radio Evolution.
Development in different stages

1900 – The first transmission
Thanks to Roberto Landell de Moura, the first human voice transmission was accomplished in 1900. On 3rd June of that year, he arranged a public exhibition for some journalists at a place near Sao Paulo, Brazil. The signal travelled 8 kilometres.
1920 – Broadcast of news programs

For the first time, They broadcasted a news program. This can be marked as the remarkable thing that happened to radio in 1920. The CBS Network owned the news station, and near Detroit, Michigan, all these happened.

When WWI took place, radio technology was still very new. Back then, only short-range communication was managed by the sophisticated gadgets of the military. The vacuum tubes were used still used by the military radio for its operation. As a result, moving it around was very hard as the military radio was so large. The Americans tweaked the existing broadcast at that time, known as the horse pack set was developed by them at that time. A horse tied to a hand generator was employed. During World War I, radio transmission was more reliable than wired telephones or telegrams.

Before the last dawn of the Second World War, radio gained popularity as a common means of information and entertainment before the middle of the second war. A firm grip was there on a radio station by the government so as on the other entertainment industry’s aspect. All of these lead to program censoring. During World War II, a series of propaganda was sourced by the radio. To keep the spirit of its citizen high was looked at by the authorities.

In North America and Europe, the limelight fell upon the transmission of commercial television in the year 1940. before all that, to transmit the images visible on TV and radio. 1940 proved to be an Age of Golden Programming for the radio shows.

With all the research going on in the 1970s, it was only a matter of time before digital radio came into existence. At the end of 1980, Asad Ali Abidi came up with a radio system. Processing within wireless communications with digital signal processing was unveiled with that system. This discovery gave more advanced radio technology birth.

The radio systems are going through beholding various advancements as we gradually make our way to access the 21st century from the 2000s. Radio Broadcasting has acquired a new face. DBS and direct radio became known in the U.S. The introduction of the internet radio is the most noticeable thing in the year the 2000s. Without the PCs, it lets people listen to the Radio, A stand-alone arrangement for people.

The internet radio was no longer a new concept in 2021. What it was two decades ago and what it is now, the evolution has almost perfected the technology. Broadcast houses have adopted live streaming on various platforms as an act of transmission has been extended in 2021. If you have missed anything, you can listen to it anytime you want to.
Over the last centuries, the radio has been used in various capacities. The radio may not be the most demanding means of communication today, but it has provided entertainment and information for many decades. And most importantly, who can forget the contribution of radio in the two world wars. Yet it has not lost its charm.