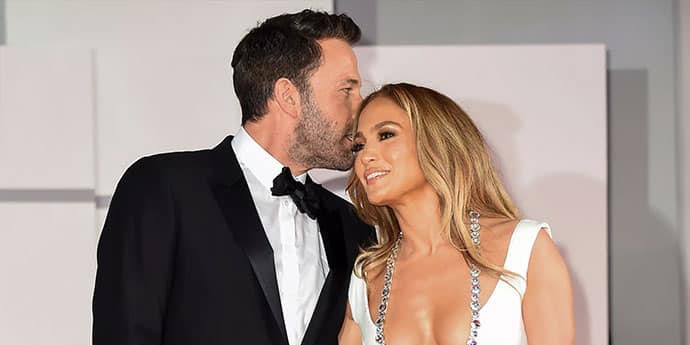 Jennifer Lopez has confirmed her wedding with Hollywood star Ben Affleck on July 16 in Las Vegas. Jennifer Lopez revealed details of the wedding via a newsletter, On the JLo, and signed it “Mrs. Jennifer Lynn Affleck.”

“We did it. Love is beautiful. Love is kind. And it turns out love is patient. Twenty years patient,” the newsletter read.

The couple first met on the sets of ‘Gigli’ in 2001, and the two got engaged a year later. However, the relationship did not last long, and the two broke up in early 2004.

Seventeen years later, the couple reconnected, and the two got engaged again in April 2021.

Ben Affleck was married to Jennifer Garner between 2005 and 2018, while JLo married her third husband, Marc Anthony, between 2004 and 2014. Lopez was also engaged to retired baseball star Alex Rodriguez before the two parted ways last year.

The newsletter read: “So with the best witnesses you could ever imagine, a dress from an old movie and a jacket from Ben’s closet, we read our own vows in the little chapel and gave one another the rings we’ll wear for the rest of our lives. They even had Bluetooth for a (short) march down the aisle. But in the end, it was the best possible wedding we could have imagined. One we dreamed of long ago and one made real (in the eyes of the state, Las Vegas, a pink convertible, and one another) at very, very long last.

“When love is real, the only thing that matters in marriage is one another and the promise we make to love, care, understand, be patient, loving, and good to one another. We had that. And so much more. Best night of our lives. Thank you to the Little White Wedding chapel for letting me use the break room to change while Ben changed in the men’s room.”