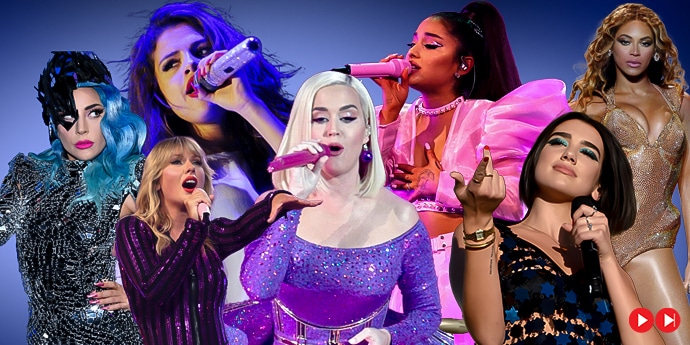 Pop is the most famous genre of music started in the middle of the 1950s all around the USA and UK too. During the 1950s pop culture had impacted mostly teenagers and all youngsters and it continued till 1960. The pop world has never halted from rocking everyone endlessly, especially the female stars have to be very perceptive and versatile always.

Here’s a list of the 10 best female pop singers:

The real name of Lady Gaga is Stefani Joanne Angelina Germanotta. Song was born on 28th March 1986. Lady Gaga is her professional name. She is famously known as a popular American singer-songwriter and actress. She is the highest-paid and one of the best female pop singers of the 2010s who won 12 Grammy Awards, 18 VMAs, 16 Guinness world records and a tribute as Billboard’s artist of the year and women of the year 2015. She is famously known for her versatility in the pop music world.

She was born on October 25 1984. Though she is known as Katy Perry her real name is Katheryn Elizabeth Hudson. She is not only an American singer but also works as a television judge in a popular reality show nowadays. When she was young, she sang in church so she thought that she would pursue her career in Bible music and it came out to be an outstanding decision for her career. She gained fame with her second album, one of the boys and pop songs like “I kissed a girl” and “hot and cold” Got the first and 3rd numbers on the US Billboard Hot 100. “Teenage Dream” generated 5 US number singles – “California Gurls”, “Teenage Dream”, “E.T” and “ last Friday night” became the first album by a solo female artist.

She always remained the best-selling artist with 143 million records worldwide released under capital and is among the best female pop singers of all time.

One of the top female pop singers, Taylor Swift was born on 13 December 1989 famous American singer and songwriter. Her narrative songwriting often influenced many teenagers because it is all inspired by her real-life and has received huge media coverage and worldwide praise too. Her famous albums like “fearless”,” speak now”, “love story”, ” belong with me” helped her to establish herself as one of the leading and best female pop singers all over the country and worldwide.

Heart’s famous singles like “ I knew, You Were Trouble” and” we are never getting back together “ supported her to lead as a single pop queen.

She was born on 4th September 1981. She is a famous American singer-producer and actress who grew up in Houston, Texas. She gained popularity in 1990 as one of the lead and top pop female singers of destiny’s child. She has more than 23.3 million subscribers on YouTube and it helps her to reach teenagers. Her famous albums like” dangerously in love” and singles like “ crazy in love”, “baby boy” are popular ones.

Gomez was born on 22 July 1992 and is famously known as an American singer and actress too. Although she started her career in a television show soon she gained fame as a pop star. “Come and get it”, “we don’t talk anymore”, “it ain’t me”, “hands to myself”,” good for you”,” same old love” are her famous singles.

She was born on 22 August 1995 as an English singer. She is another among the top pop female singers. One of her famous singles was one case, Calvin Harris becoming the most famous number-one single by a female artist and own singles. She also won awards in 2019 as the best new artist and for best dance recording.

She was born on 26th June 1993 in Florida and is best known as an American singer and actress. She has received numerous awards like Grammy, Brit award, Bambi award, 3 American Music Awards, 9 MTV Video Music Awards and that is why she is one of the best female pop singers. Her debut album yours truly became the most famous. The problem, break free and Bang Bang received global ackacknowledgementr for her incredible vocal range.

She was born on 30 March 1997 in Cuba. She is also one of famous American female pop singers and songwriter. ”Havana“ became the most famous of all following the next “never be the same”. Her famous song “Señorita” 2019 became extremely popular all over the world. baharther album “Romance” gained her 3rd debut on the Billboard d 200 chart. She won many awards like Latin Grammy Awards,5 American Music Awards, Billboard Music Awards and so on.

She is one of the youngest American female pop singers and monitor was born on 18 December 2001. Her debut single “Ocean Eyes” reached attention all around the world in 2015. The song was produced by her brother. Her first successful debut commercial was “extended play smile at me”2017. Everything I wanted, “my future,” “ therefore I am,” and “power” have been selected for most popular singles. She has also received awards like Grammy, American Music Awards,3 MTV Video Music awards, beat awards and so on.

She is one of American pop female singers famously known for her singles like “I am a mess” or “Meant to be”.

In 2016 “I got you” was released and it became so popular. She was nominated in 61st Grammy annual awards just for her” meant to be” song.

These are those famous crazy pop female singers who never failed to get our attention all the time. Their music sense always drives us crazy. Many pop singers have contributed to this pop world throughout history but these 10 best female pop singers are irreplaceable.