Find out how this Sweden DJ became world famous! 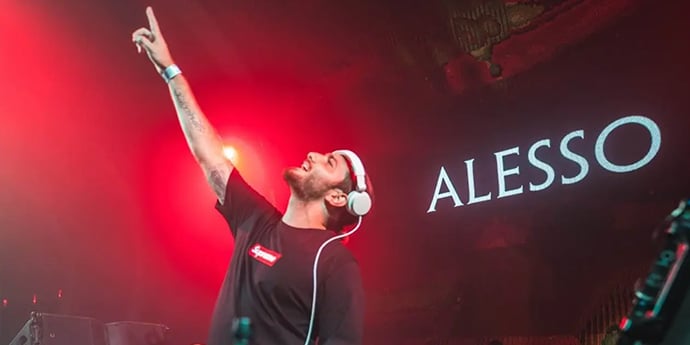 Who is DJ Alesso?

The DJ and EDM producer Alessandro Renato Rodolfo Lindblad, known widely as Alesso is from Sweden and has achieved worldwide success by combining progressive house, EDM and pop, collaborating with artists such as Tove Lo, Calvin Harris, Katy Perry, Usher, David Guetta and more. Coachella and Tomorrowland are among some of the biggest music festivals he has performed at. His productions are known for using melodic elements, as well as his alternating between rave and those melodic elements. DJ Alesso songs that are famous include Years, Heroes (We Could Be) and Under Control among many others. According to www.djrankings.org, Alesso’s DJ rank is 31.

Swedish and Italian by birth, Lindblad was raised in Stockholm. As a child, he played the piano. Though his father was a DJ and dancer for fun, neither of his parents were professional musicians. His fascination with house music began when he was 14 or 15 thanks to DJs like Erick Morillo, Roger Sanchez and Eric Prydz. In 2010, he released the Alesso EP, which became his first break. Alesso was contacted by Sebastian Ingrosso of Swedish House Mafia in early 2011 for a collaboration. He learned about DJing from Ingrosso, who helped to produce his tracks. Even though Alesso’s DJing career began in 2011, his debut on the list of DJ Magazine’s top 100 DJs was at number 70 the following year.

Sebastian Ingrosso and Alesso produced “Calling”, a Beatport chart-topper in 2011. In 2011, Alesso’s remix of “Pressure” by Nadia Ali topped the Hype Machine charts and was the top EDM song played in 2011. Afterwards, he continued to gain popularity. In March 2012, he recorded an Essential Mix for BBC Radio 1 and was named one of MTV’s “EDM Rookies to Watch in 2012.” Another original mix from DJ Alesso featuring Matthew Koma was released at the end of 2012 and was successful in the United Kingdom. DJ Alesso had performed at such festivals as Coachella, Electric Daisy Carnival, Ultra Music Festival, and Tomorrowland by 2013. One of his remixes of OneRepublic’s “If I Lose Myself” was nominated for a Grammy and racked up almost a million SoundCloud listens in no time. DJ Alesso collaborated with Calvin Harris and Hurts on the single “Under Control,” which got viewed 88 million times. The DJ Magazine ranked him 20th in its top 100 DJs of 2012.

After signing a deal with Def Jam Recordings in 2014, DJ Alesso released his debut album, Forever, in 2015. Afterwards, he collaborated with some famous Asian pop stars. “I Wanna Know” had a Taiwanese singer on vocals and that was promoting it in Shanghai and Ibiza, while “Years” was given a K-Pop makeover with EXO’s Chen.
Hailee Steinfeld, Andrew Watt, and Florida Georgia Line were part of Alesso’s all-star collaboration “Let Me Go” in 2017. The song reached #6 on the Billboard Dance/Electronic chart after reaching the Top 40 worldwide. In 2018 he was back with the singles “Remedy” and “Tilted Towers” following his collaboration with Anitta in 2017. Progresso, Vol. 1 was released by DJ Alesso in early 2019. A number of non-album tracks were released in 2020, including “In the Middle,” “Midnight”, and “The End.” In June 2021, Progresso, Vol 2 was released, and after that, more non-album tracks, including “Leave a Little Love”, “Going Dumb”, and “Chasing Stars” were released.