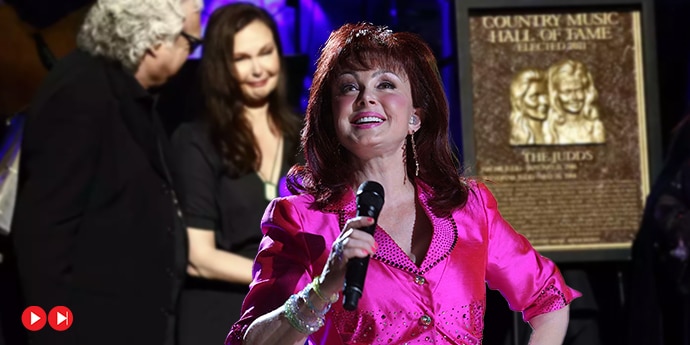 A day after legendary country music singer Naomi Judd’s death, The Judds were inducted into the Country Music Hall of Fame. The ceremony was attended by Naomi Judd’s daughters Wynonna and Ashley Judd, who accepted the induction amid tears.

Country singers and musicians mourned the death of Naomi Judd during the ceremony while also celebrating the four inductees – The Judds, Ray Charles, Eddie Bayers, and Pete Drake.

Media reports claim that Naomi Judd died by suicide on Saturday after a long battle with mental health. She was 76.

“I’m sorry that she couldn’t hang on until today,” Ashley Judd said while accepting the induction amid tears.

“Though my heart is broken, I will continue to sing,” Wynonna Judd said.

Naomi recorded and performed with Wynonna as one of the most successful mother-daughter acts in country music in the 1980s. “Mama He’s Crazy” in 1984 won The Judds their first Grammy Award. “Grandpa (Tell Me ‘Bout the Good Old Days)” in 1985 and 1990’s “Love Can Build a Bridge” were among some hit numbers by the group.

The Judds stopped performing in the 1990s after Naomi was diagnosed with hepatitis C. However, Wynonna continued with her solo career.

The duo most recently reunited during the 2022 CMT Awards in Nashville in April, performing “Love Can Build A Bridge.”

Naomi Judd has also written self-help and children’s books, including her memoir ‘River of Time: My Descent Into Depression and How I Emerged With Hope.’