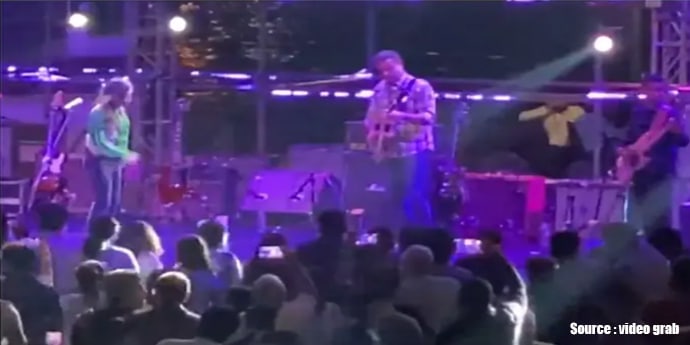 Anand Mahindra was all praise for former Member of Parliament and Union Minister Milind Deora after the latter’s performance at a music festival in Mumbai at the weekend. The Indian National Congress leader Deora played the guitar at the music festival organised by the Mahindra Blues. The video has gone viral now, with netizens praising the 45-year-old Congress leader for providing the entertainment.

Milind Deora, who has been playing guitar for almost 30 years now, entertained the music lovers in attendance at the Mahindra Blues Festival on Saturday. Mahindra Blues is Asia’s largest Blues festival, invites some of the world’s best Blues musicians for a two-day festival in Mumbai. The gala did not take place for two years due to the Coronavirus pandemic but returned this year with a bang.

Industrialist Anand Mahindra tweeted a video captioning, “And on the marquee tonight at the @mahindrablues was former MP & union minister @milinddeora (stage name: MD Mississippi) demonstrating his musical talents. Perhaps the only politician-blues musician in the world.  His party is the INC, & with him, the ‘C’ stands for Cool!”

Milind Deora too has responded on the video tweeted by Anand Mahindra with a thank you note.

“Thank you, Anand for keeping the blues alive,” Deora tweeted.

According to his website www.milinddeora.in, “Milind Deora draws inspiration from a variety of musicians and genres, from funk classics like Earth, Wind & Fire, to Hindustani Classical music from luminaries like his childhood idol Ustad Bismillah Khan.”

The website further states, “it was during his years in Boston, though, that Milind would discover the genre that has shaped his musical life as an adult: the blues.”

Deora has also played on-stage with legendary blues guitarist and one of his blues heroes, Buddy Guy.