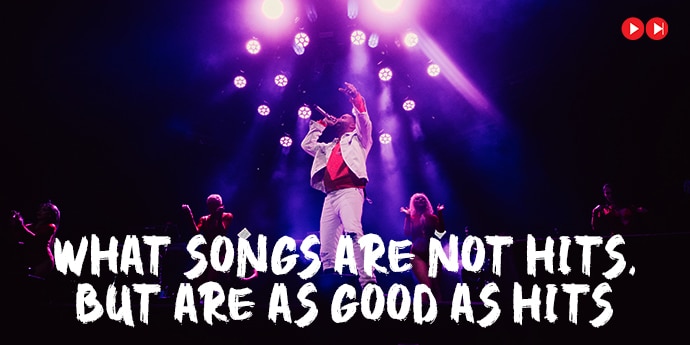 Songs had always played a major role in every person’s life. It’s due to the soothing tunes of the music only a person can dissociate themselves from everything in the world and go with the flow of the soothing tunes of the song. But also that does not mean that every single song provides that kind of impact that it can lead to relaxation and peace into the minds of the people. Few songs could also provide the exact opposite experience for the people.

So henceforth, we are always able to find a combination of both good as well as bad songs too. But it might be strange if we go on to discuss about what songs that are not hits, but are as good as hits. Now, there might be a number of reasons why this might happen. It might be due to change in preference of the masses, might be the song was way advanced then the time it’s been released, it might not suit the trend of music. But at some point or the other one cannot deny the fact that these songs had great impact into the minds and hearts of the people.

So, here are some of the songs that are not hits, but are as good as hits

It’s the song from a movie named “Patiala House” starring ‘Akshay Kumar’ in the lead role.
Sang by ‘Shafqat Amanat Ali’ and composed by ‘Shankar Ehsaan Loy.’
This is one of the song that every middle class youth can associate themselves with. The lyrics of the song is so well written, it actually encapsulate the emotions of every middle class person who had to sacrifice with their dreams. Wonder why this song could not be a chartbuster at that point of time, but one thing for sure that this song has been acceptable by every person who has once heard this song. So, this song definitely tops in the list of what songs that are not hits, but are as good as hits category.

It’s the song from a movie named “Naam Shabana” starring ‘Tapsee Pannu’.
Sang by ‘Sunidhi Chauhan’ and written by ‘Manoj Muntashir’.
This song showcases the perfect combination of difficult situation and one handling those situations with utmost braveness. Every lyrics and the way the song was sang gives a sense of confidence to every person that one can definitely combat every situations that come in their way. Hence, this song definitely comes in what songs that are not hits, but are as good as hits category.

This is the title track from the movie ‘Lakshya’ starring Hrithik Roshan.
Sang by Shankar Mahadevan, composed by Shankar Ehsaan Loy and written by Javed Akhtar.
This song is also quite an underrated song that we may have come across. This song might not have been one of the biggest hit at that point of time. But had left a sense of motivation for every person to achieve what they aim for.

This is a patriotic song from the movie ‘Kesari’.
Sang by B Praak and Parineeti Chopra, written by Manoj Muntashir and composed by Arko Pravo Mukherjee.
We can’t complete the list without enlisting this song. It’s such a patriotic song that makes us feel proud about the soil that we live in and makes us feel responsible to respect the soil for which so many brave hearted people sacrificed their life for.

So here are some of the songs that are not hits, but are as good as hits. These were just few of them, if we go on discussing the number of underrated songs then the list will never end. Because the demand of good things are always low, so in that way same we can say that these songs which are high on composition, lyrics has remained underrated but one can definitely dive into the soul composition of these songs.