Revisiting Some Of The Popular Rahat Fateh Ali Khan Songs 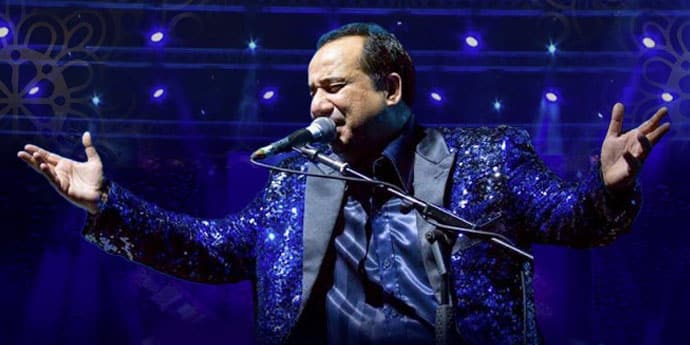 A legend whose music can stay on loop, yet makes you feel alive every time you hear it is Rahat Fateh Ali Khan, the soul stirring voice that weaves the threads of magic and infuses love even into stones. A global audience has been reached by his art, transcending national borders.

Nusrat Fateh Ali Khan taught Rahat Fateh Ali Khan music as a young boy. Fans of music still enjoy some of Rahat Fateh Ali Khan’s most popular songs. As a nine-year-old, he performed for the first time in public, endowed with a deep voice and great singing abilities. He made his Bollywood debut with ‘Mann ki Lagan’ from the movie ‘Paap’. Aside from Indian singing reality shows such as ‘Chhote Ustad’ and ‘Junoon’, Rahat Fateh Ali Khan has also performed on musical shows. During the Nobel Peace Prize Ceremony in 2014, he was the first Pakistani singer to perform. In this article, we’ll be revisiting some of legend’s most well known Bollywood songs.

Here are the most popular Rahat Fateh Ali Khan songs in the Indian subcontinent.

There is no doubt that one will feel many emotions when listening to this soothing romantic song. One of the masters of love ballad singing, Rahat Fateh Ali Khan, crooned this song. Rahat Fateh Ali Khan’s soulful voice, along with the lyrics and music, make this song one of the most memorable ones in this list. The track from the film Sultan describes the love between a guy and his girl in a way that is very simple, soft and heartfelt. Truly one of the really amazing Rahat Fateh Ali Khan songs.

Next up on our list of Rahat Fateh Ali Khan songs is Sajda. A romantic number from the film My Name Is Khan showed off Kajol and Shah Rukh’s chemistry. Currently, many weddings still feature this song for the bride and groom. It wouldn’t have been the same if Rahat Fateh Ali Khan hadn’t sung it so beautifully, winning the Mirchi Music Awards for ‘Best Song in Sufi Tradition’ in 2011.

Do not get confused. The father and son have both sung this song, and they have both done it in an unmatched manner. Initially, the song was released in Souten, and then it appeared in Fanney Khan, which starred Anil Kapoor and Aishwarya Rai. Truly a classic by the maestro Rahat Fateh Ali Khan.

Father and son have also sung Husn Jaana Ke Taarif. In India, it became known as Afreen Afreen. There were times when people tuned into the music video channels just to hear Nusrat’s rendition of this song. He has his son render it in a lower tone and in a style that is more in keeping with Bollywood aesthetics. The Coke Studio version also has Momina Mustehsan with Rahat Fateh. Pakistan’s Coke Studio songs are known for being beautifully soulful, Afreen Afreen is no exception.

A few Bollywood movies have featured Rahat Fateh Ali Khan’s song Mein Tenu Samjhawan. Khan’s unplugged rendition for Humpty Sharma ki Dulhaniya is the most famous. It previously appeared in the film Virsa. A timeless composition and timeless lyrics keep the song relevant even today. Rahat Fateh Ali’s original track still holds the same magic even though Arijit Singh sang a different version. Soul-stirring tracks like this are an integral part of every ‘Sufi’ night.

From Om Shanti Om comes Jag Soona Soona Lage, a Rahat Fateh Ali Khan sad song that is one of the most emotional ones in modern Bollywood romance. Throughout the song, Shah Rukh Khan is depicted as a lovelorn man who has just realised the love of his life isn’t there for him. There is no heartbreak anthem more iconic than this one from Om Shanti Om. We were blown away by Rahat Fateh Ali Khan’s incredible singing in one of the most dramatic, filmy, most Bollywood songs ever. A perfect rendition of Om’s angst and heartache, this song proved that Ustads like Rahat Fateh are equally adept at both Qawwali and commercial music.

This Rahat Fateh Ali Khan hit song comes from the movie Love Aaj Kal and has an earthy Punjabi flavour. His singing other than Sufi tunes demonstrated his brilliance. This song will evoke a genuine plea from the bottom of your heart for the person you love. Tabla and Harmonica play in the background, elevating the track to new heights. Everyone went on an endless repeat mode when hearing the songs of ‘Love Aaj Kal’, which still touches your heartstrings.

One of the classic Bollywood songs; Rahat brings to the fore a slow, lilting melody with his unique rendition of Jiya Dhadak Jaaye. Kalyug, a Bollywood film starring Kunal Khemmu, first featured the song. It brings out the movie’s high level of emotion in one go. The soothing and soulful love song is elevated by Rahat Fateh Ali Khan’s vocals. It is because of this romantic song that anyone would even remember the film ‘Kalyug’. Rahat Fateh, known for his high-pitched vocals, delivered a love anthem that left us swooning. A classic, this definitely earns a spot in the Rahat Fateh Ali Khan best songs list.

This Rahat Fateh Ali song was a major hit, even though the movie bombed at the box office. In this magical number from ‘Jhoom Barabar Jhoom’, the lyrics are beautifully crafted and will leave you in a state of awe.

An image of the beauty of loved ones’ eyes is depicted in this romantic Rahat Fateh Ali Khan song. It comes from the Dabangg film. This was another lovely song performed by Shreya and Rahat together. You’ve never been able to describe your lover’s eyes in a more quirky or sassier manner than with this. An enchanting love ballad written by Faiz Anwar, Tere Mast Mast Do Nain is brought to life beautifully by Rahat Fateh Ali Khan. Almost entirely in lyrical form, the song captures the euphoria of falling in love for the first time before one becomes jaded with cynicism. It takes only a few seconds for eye contact, looking at someone, to induce a strong emotion.

We hope you enjoyed reading this Rahat Fateh Ali Khan songs list. For more such content, keep reading on GrooveNexus!