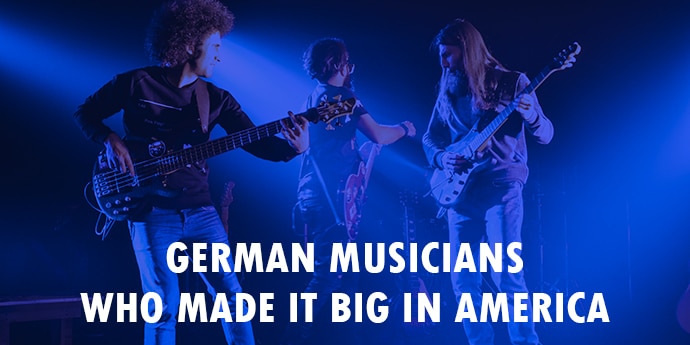 Nena became the face of the German New Wave movement in 1983. However, several more German singers have dominated the worldwide charts in recent decades. We are pleased to showcase the finest German vocalists.

When one of these storms threatens to wreak havoc along the coast, radio stations routinely play the Scorpions’ 1983 signature song, “Rock You Like a Hurricane.” MTV catapulted the high-energy glam metal song to reach number 25 on the mainstream Billboard Hot 100 during its peak.

Rudolf Schenker, rhythm guitarist, principal composer, and longest-serving original member founded the German band in 1964. Even though the Scorpions’ music has incorporated hard rock, heavy metal, and glam metal ballads and songs throughout the years, the group is known as “The Heroes of Heavy Metal.”

Anton Zaslavski, a Russian-German record producer, derives his stage name, “Zedd,” from the first letter of his surname. In non-American English, the letter “z” is pronounced with the zed sound.

Zedd is a formally educated musician who comes from a family of musicians. Growing up playing piano and drums, he transitioned from performing deathcore metal as a teenager to producing and penning popular singles. Zedd is not himself a singer. Instead, he is recognised for his songwriting and music production collaborations with notable vocalists and for remixing the popular songs of top musicians such as Lady Gaga, Justin Bieber, the Black Eyed Peas, and Shawn Mendes.

Would it surprise you that a German popularised this 1999 Latin pop song? Not a joke. German singer-songwriter David Lubega, better known by his stage as “Lou Bega,” was inspired by a teenage vacation to Miami. “Mambo No. 5 (A Little Bit of…)” topped the worldwide music charts due to his use of this event. The Bega never had another Top 40 Billboard Hot 100 single in the United States. Consequently, he is a one-hit-wonder.

Fewer than twenty non-English songs have ever hit the Top 40 on the US Billboard Hot 100 chart. One of them is the new age song “99 Luftballons” by the German band Nena.

The anti-war song from 1983 tells the tale of 99 balloons misidentified as a UFO, leading to a horrific conflict with no victor. Consequently, Nena became a one-hit-wonder in the United States. The song’s English version, “99 Red Balloons,” was published the next year and became successful in the United Kingdom, Ireland, and Canada, but not in the United States. From 1982 through 1987, the German band experienced more success in its own country.

This German synth-pop trio was initially known as “Forever Young,” but changed its name to “Alphaville” after the 1965 German Oscar-winning film of the same name. (The film was a future dystopian science fiction film about a despotic computer system taking over civilisation.) Although the band’s highest-charting song, “Forever Young” (1984), reached just #65 on the mainstream Billboard Hot 100, it was a smash on the US Billboard Dance chart.

The German-French R&B duet Milli Vanilli did very well until they revealed the tragic truth. The top-rated musicians were imposters who lip-synced. Their voices did not feature on any of the hits that had contributed to their success.