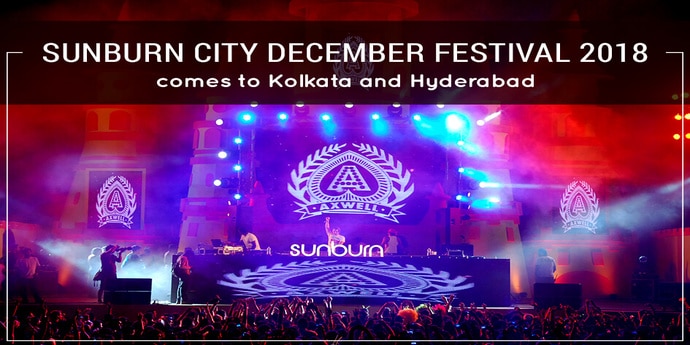 Exhilarating energy and unstoppable zeal are what Sunburn is all about. Sunburn, one of Asia’s biggest music festivals, is here to leave you twirling, swirling and dancing your heart out before the New Year. The Sunburn Festival is one of the most iconic names in the Electronic music scene to have seeded music tourism in India. Over the span of 11 years, Sunburn has solely changed the image of India’s music festivals around the world.

The Sunburn festival 2018 is at its 11th edition. Started in 2007 as a 3-day musical extravaganza in goa, sunburn has acquired cult status with an eclectic mix of music, entertainment, experiences, and celebration.

Sunburn is the only festival to have brought down the biggest global line-ups to India featuring massive headliners like Swedish House Mafia, Martin Garrix, Tiesto, Avicii, Hardwell, etc.

It has, also, brought together Indian artists to get thousands of dance music lovers to go breathless. Sunburn has positioned India as a prime dance festival destination to the world through its various formats.

It is fairly adjudged as Asia’s largest 3-day Electronic Music Festival. IMS APAC Business Report 2014, ranked Sunburn as big as Tomorrowland and Ultra Miami Festival along with it being the 3rd largest dance festival in the world to entice people from over 40 countries across the globe to India.

This New Year, pack your bags and head on to the most awaited EDM festival. Sunburn City Festival 2018 will commence in Kolkata and Hyderabad with a massive artist line-up.

The Kolkata leg of the City Festival will be dazzled by legendary artists like:

Siana Catherine is the youngest female artist to have performed alongside with world’s top DJs. Trap and EDM clichés, when intertwined with her distinct and crystalline vocals, makes her music truly unique. She has opened for huge EDM artists like DVLM and Martin Garrix. From being virtually unknown, touring worldwide to running a podcast called PowerMix, she has achieved it all. She has 15 India tours across 27 cities, and performances at Sunburn Campus, Vh1 Supersonic 101, Playboy Club, Godfather Beer festival, FTV crown, Havana Club and Gate Crashers under her belt. Follow them for more updates on their Facebook page.

Alan Olav Walker originally had his stage name as DJ Walkzz. Walker is a Norwegian record producer and DJ. He is acclaimed for his 2015 single “Faded”, for having received platinum certifications in over 10 different countries. Ranked 17th on DJ Mag’s Top 100 DJs list of 2017, he uses a hoodie and face mask based on the concept of the black bloc on stage to create his trademark look.

In an Interview, he explained his musical journey in the following words “When I was a kid, I had a fascination for programming and graphic design. Music kind of just happened spontaneously a few years back. I found a track on YouTube that I liked – it inspired me, and it made me start exploring producing myself. Everything started online with people, or rather nicknames, from around the world helping each other out. Now music is a big part of my life”. Follow them for more updates on their Facebook page.

Jahan, Yasmine, and Rainman, who create music in their gritty yet artsy neighborhood, set the national stage with their debut video. “Killin’ It”, in early 2012, chalked up Facebook likes and went viral around the globe via Twitter. EDM fans swooned over KREWELLA’s unique brand of Dubstep-infused electronic music with catchy female vocals. Every track on the ‘Play Hard EP’ embodies a different subgenre of EDM, ranging from Dubstep to Progressive House, to Moombahton. Krewella swears by only one goal “Making you wet…one song at a time”. Follow them for more updates on their Facebook page.

Emir Kobilić, also known as Salvatore Ganacci, is a Bosnian-born Swedish DJ, record producer and co-founder of the THOR radio show on Sveriges Radio. He got his name Salvatore Ganacci, from his friends when they saw his long hair getting in the way of his opponents while playing football. The guy is a stallion when he is performing on stage. You can witness him twerking, rolling around, throwing himself across the stage and dancing like no one’s watching. Follow them for more updates on their Facebook page.

You don’t wanna miss out on this!

SUBSCRIBE TO OUR NEWSLETTER
Events, Music Fest
Rate the Article