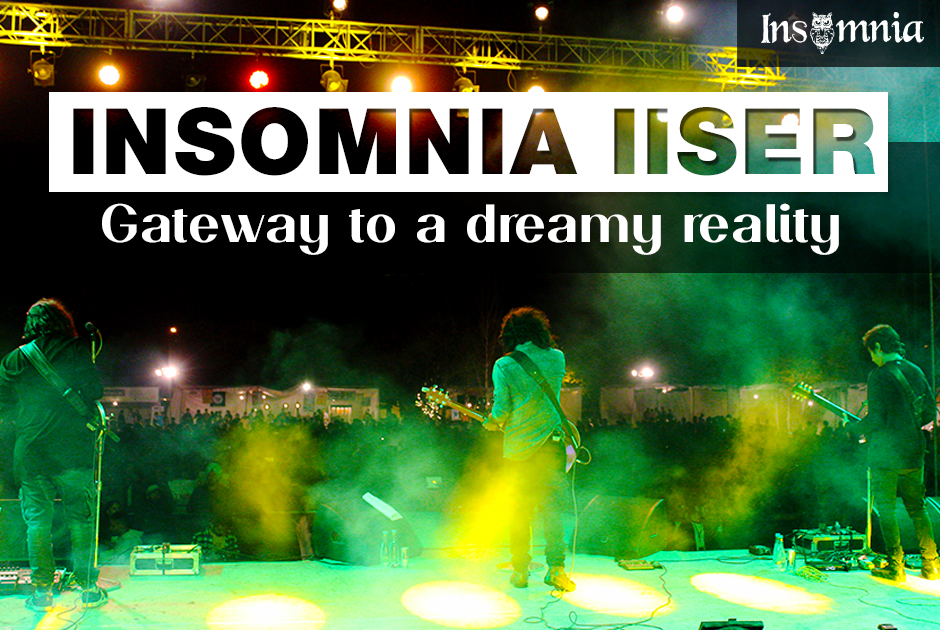 Gateway to a dreamy reality, Insomnia IISER, has set forth on its seventh-year voyage this year. Since its kick-off in 2013, it has been one of Chandigarh’s biggest and most awaited fests, the Tricity. INSOMNIA IISER is a panorama of music, dance, art, drama, literature, quizzing, and gaming with a footfall of 10,000-12,000 every year.

They say, “Insomnia will put you in a trance. Dreamers, this is your place to be in!”

This year, the Indian Institute of Science Education and Research (IISER) Mohali’s annual fest, IISER INSOMNIA 2019, will be held from March 1-3. Its soul lies in the celebration of cultural brilliance and vibrancy with a passion for connecting. A host to musicians from pan India and the world, the major highlight of the fest is its live performances.

They have hosted:  Insomnia IISER

Established in 2007, by the Ministry of Human Resource Development (MHRD), the Government of India, IISER – Mohali is a premier science institute. On the Scientific Advisory Council’s recommendation to the Prime Minister, IISER was constituted as an ‘Institute of National Importance’ in 2010. This institute is home to over 1200 Int. Masters’ students, 400 Ph.D.’s, and several research scholars.

What must you attend in INSOMNIA IISER?

Aria is a musical fantasia in INSOMNIA fest, comprising of Crescendo (the Battle of the Bands), which hosts the best bands from the country playing the best of their tunes. It also has Sargam (solo vocal competition), Resonance (instrumental competition-solo) along with Make Some Noise (group vocal competition). Drop-in on the battlegrounds to hear some banger music.

The dance show in the INSOMNIA fest comprises of three events, Encore (the dance battle), Solo and duet dance, and Bhangra Fever, that’s the most attended. The best of the dance troupes from throughout the country come to show their moves.

As is a dash drama important in life, the dramatics’ events keep up the spirits with their panoramic performances in different events. They have Nukkad (street play), Dhiti (stage play), Stage Craft (theme based, extempore mono acting).

The musical nights are of major action and attraction at INSOMNIA IISER. INSOMNIA fest in Mohali host three musical events on all three nights. As mentioned above, the first night during IISER Insomnia 2019 is going to be a night of fusion, the second will be Live Wire, and the third, as always, would be PRONITE.

The headlining act in INSOMNIA IISER Mohali will be by the Rock-band ‘Swastik’. The band has Rohit Joshi as the songwriter and on the Guitar, Hardeep Singh and Vipul Chopra on vocals, Paarth Koser on drums, and Pankaj Sharma on bass, and Flute is played by Madusara Liyanag. Their influence lies in the Indian Classical and alternative Rock. Their breakthrough song ‘Kuch Bhi Kar Lo‘ stayed in the top charts on MTV Indies. Another single ‘Jogi’, with a new line-up, crossed over two million views on YouTube.

SPUNK! the Hindi Alternative Rock band will be headlining the night of Live Wire.

Seedha Palaat Udhar Nautanki Kahike formed as a side project by Cynical Recess members, one of the most famed Rock bands in the country. The USP of this Mumbai-based band provides an edge to both old and modern Bollywood songs, reviving them to make it relatable to all. Within six months its kick-off, they bagged fame throughout the country.

They have headlined various school/college events and corporate parties across the country. Its band members are Abhishek, Rahul, and Abhinandan on vocals, Abhishek and Jojo on the Guitars, Abhinandan on Drums, and Rahul on bass. This band is about to release their debut album AARAMBH, very soon.

The artist headlining the Pronite is EDM artist DJ MYRIS. He will be headlining 9xM Bharat Bass Festival.

Therefore, be ready to live a dreamy reality and experience INSOMNIA 2019 IISER Mohali like never before.

SUBSCRIBE TO OUR NEWSLETTER
Events, College Fest
Rate the Article