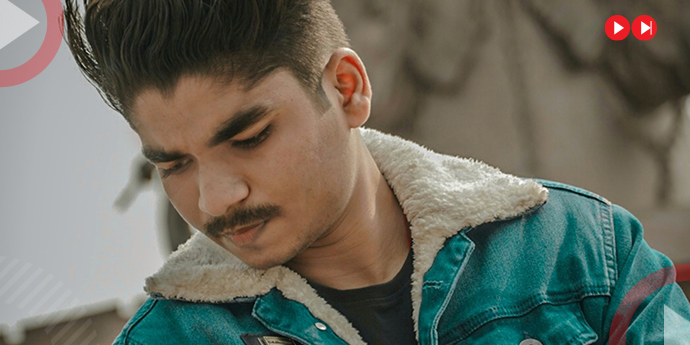 Arpit Verma, also known by his stage name KingAP is a rapper, lyricist and a singer who is mostly known for his rap covers and originals. Born in Lucknow, Uttar Pradesh, this 21-year-old artist was always fond of music since his childhood. At first, he used to listen to retro songs and later he discovered western music and rap songs. He was highly influenced by Honey Singh who was ruling the Indian rap scene at the time.

He started writing poems and shayari when he was all of 15 and use to remix songs adding his own little twist in them. He made his friends listen to some of his remixed songs and his friends really liked it. They were the ones who convinced him to pursue music further. He was 16 when he wrote his first song ‘Guzarish’ in 2016 along with proper lyrics and a dummy composition.
He then started recording songs on his phone and uploaded them on his YouTube channel. In 2018, he met Abhinav (YUVA), one of his very close friends who has also been a constant pillar of support in his life guiding him through right and wrong. Abhinav was the one who made KingAP visit some of the music studios in the city and that’s when he met Aakash Soni (Soctor Drange) who is a well known and talented music producer in Lucknow.
Aakash played a big role in making KingAP learn how to write lyrics properly and how to deliver them in rap songs. Arpit wanted to write songs that his audience can relate to and make a connection with. He then met Rohit Pandey, who is also a singer and a mutual friend of KingAP and Traxeon from Lucknow.
In 2019, Rohit introduced KingAP to Traxeon and that was when they collaborated to make the rap cover of ‘Tera Zikr’ which was sung by Rohit and music was produced by Traxeon and KingAP was the rapper. After a while, KingAP and Traxeon started working on KingAP’s original song ‘Guzarish’ which was again sung by Rohit and rapper was KingAP himself. This was the first single of his debut album ‘2K16’. After this, KingAP and Traxeon collaborated to make some original songs and some rap covers which were also loved by audience.
KingAP is the first rapper from Lucknow who has been part of song made internationally. He also got a shoutout from a famous YouTuber AFAIK and started his own YouTube channel ‘Syahi Records’ along with his friends YUVA and KAFIR. He also wrote the famous single of Traxeon Teri Kami which is one of the most popular songs of Traxeon.

KingAP’s debut album 2K16 released under GrooveNexus Records has 8 songs featuring 3 artists, Rohit Pandey, Harshita Baranwal and Neha Rawat. Abhimanyu is the lyricist of three of the songs from his album and music is produced by Traxeon.
KingAP wants to release more music in the coming years and work on his craft side by side.