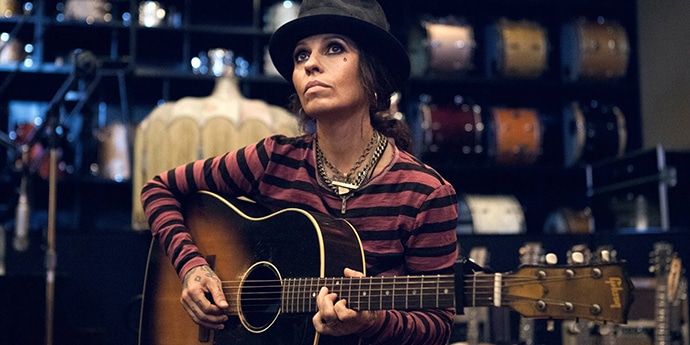 Linda Perry is an American record producer, musician, singer and songwriter. She was the lead vocalist and key songwriter for the band 4 Non-Blondes, and since then she founded two record labels and written and produced hit songs for various other performers. Among Linda perry’s songs, most famous are Christina Aguilera’s “Beautiful,” Gwen Stefani’s “What You Waiting For?” and Pink’s “Get the Party Started.” Perry has also signed and distributed James Blunt in the U.S. and contributed to Adele, Alicia Keys, and Courtney Love songs. Perry was elected into the Songwriters Hall of Fame in 2015.

Linda Perry was born in Springfield, Massachusetts, in 1965. Perry was musically gifted and curious from an early age, thanks to his upbringing in an artistic and musical family. She remained focused on music despite her renal ailment and subsequent drug addiction. Her mother (Marluce Martins Perry) is Brazilian, while her father is Portuguese-American (Alfred Xavier Perry).

Linda perry’s age is 57. As a teenager in San Diego, she developed a musical interest, playing the guitar and auditioning for all-girl cover bands. Her landing in San Francisco would start her professional musical career. Perry, who lived in a cramped, windowless flat, would take her guitar and sing her songs throughout town. Third Eye Blind’s leaders Stephan Jenkins and Perry played original themes for each other.

Linda Perry 90’s debut album, Bigger, Better, Faster, More!, features the hit track “What’s Up?” written by Perry. Perry had a solo role in Roger Daltrey’s February 1994 production, released on CD and DVD. Pete Townshend and The Who’s Music: A Celebration The songs “Doctor Jimmy” and “I’m Free” were published on C.D.s and VHS films of the performances in 1994 and 1998, respectively, while the song “I’m Free” was released on DVD in 1998.

In 1994, Roger Rocha was replaced by Jim Mankey, who had performed on Van Halen’s rendition of “I’m the One,” which was used as the theme for the film Airheads. In 1996, Bill Bottrell and the Tuesday Night Music Club members released 4 Non-Blondes. Interscope permitted Perry to create a solo album, but the rest of the band was dropped. In-Flight, published in 1996, was a considerable departure from the band’s prior work, being sad, mellow, and dark at points.

Linda Perry’s wife Sara Gilbert attended the Los Angeles LGBT Center’s An Evening with Women event in 2014. Perry declares herself to be a lesbian. In 1995, she told a reporter from The Advocate, “That’s all there is to it; I’ve always liked ladies. I’ve never been anyone else before.” During a performance with 4 Non-Blondes at the 1994 Billboard Music Awards, she had already written the slang term “dyke” on her guitar.

Perry used to be in a relationship with actress Clementine Ford from 2009 until 2010.
Perry began dating actress Sara Gilbert in 2011. They announced their engagement in April 2013, and they married on March 30, 2014. Gilbert gave birth to their son Rhodes Emilio Gilbert Perry on February 28, 2015. Perry is Gilbert’s stepmother, and he has a son and a daughter from a prior relationship. Gilbert filed for divorce from Perry in December of this year.