From battling depression to becoming a successful DJ at 20- DJ Trishina gave it her all! 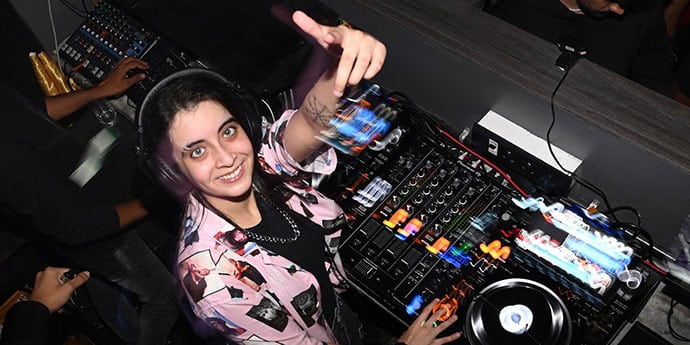 “When the going gets tough, the tough get going”- DJ Trishina proves it right! Here’s a dose of inspiration for y’all, keep reading!

DJ Trishina is a young, multi-genre DJ and fusion music producer from Mumbai. She was exposed to many different music genres at a very young age, owing to her father’s deep interest in music. Her three elder siblings are music-lovers too.

Being from a family of music-lovers, her interest in music sparked at a very young age. Growing up, she would always be the one playing at high school parties. She would make playlists, CDs, and mixtapes for her friends. In fact, she enjoyed making music so much that she would put more work into making those playlists than she would into studies.

Unfortunately, her father passed away due to cancer when she was 14, soon after which, she got diagnosed with anxiety and depression. That’s when she found her support system in music, which was like the light at the end of the tunnel, nothing less than therapy for her.

At the age of 15, she started dreaming of making a mark in the world as India’s no.1 female DJ. So, to give shape to her dreams, she took one step ahead and became a certified DJ under ‘The Music Inc’ at the tender age of 16. As luck would have it, everything just started falling into place and she started getting gigs every weekend! Today, she proudly says that she has played over 300 gigs across the country! She credits her success to the support she received from her family and friends, especially when she decided to drop out of college to pursue DJing full time.

She tells GrooveNexus, “I am grateful to my parents, teachers & audience for always supporting me in getting where I am today. I hope to make my dad proud and make a difference in the world of music.”

At the age of 20, she became a certified music producer and found her specialty in producing music with a fusion – by making remixes and mashups of songs of 2 different genres at once. She played as the youngest Resident DJ in Mumbai at 21 years old.

She says, “To me, there is no better feeling than when I’m behind the console – blinding lights, smoke machines, pulsing beats, the crowd going wild, and me orchestrating it all. Being able to control a big crowd and having the entire club vibe to your music- for me, that is the most powerful feeling in the world. I plan to heal people through my performances, just the way I healed myself.”

Having collaborated with popular brands like Hungama, Humans of Bombay, and Durex, she has made a presence for herself through multiple interviews and articles. She became a published author at age 19 when she published an autobiography called “Smoke and Mirrors,” in which she talks at length about her journey as a DJ, the loss of her father, being part of the LGBTQIA+ community, and more.

Apart from DJing and producing music, she is a resolute animal lover. She frequently volunteers at animal shelters and spends her free time feeding the strays around her town. She’s also very inclined towards fitness and sports, and thus spends the rest of her time doing that. She also likes spending time with her family and friends.